Oh no, not the hooch! - Monsters that steal/break your stuff

Sand Sprites
You can hear sand sprites before you see them - the plip-plip-plip of thousands of tiny padded metatarsals like a sudden gush of rain as they explode at speed out of the nearest sand dune or rocky steppe. Each sand sprite has the capacity to absorb 4 times its body weight in water and moves unerringly to the nearest source of water when dry. Once they consume every last drop of water, they flee to their underground burrows. There, they disgorge their precious supply into a communal spawning pool, allowing the twin queens the sustenance they need to continue birthing more sprites.
Tiny Insect Swarm
AC: 12 HP: 22 Speed 40', Burrow 20'
Damage Resistance Bludgeoning, Piercing, Slashing
Condition Immunities: Charmed, Frightened, Grappled, Paralyzed, Petrified, Prone, Restrained, Stunned
Blindsight 10 Ft.
Perception +3Pinch Attack (at or above half health) +4 / 2d4 Piercing + 1d4 days' water rations
Pinch Attack (below half health) +4 / 1d4 Piercing + 1d2 days' water rations
Consider: 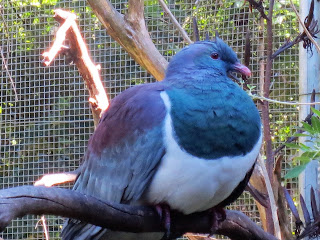 not brown but still swole
https://www.flickr.com/photos/purdyrns/32638455676
Lodesparrows
These chestnut brown birds nest in cliff faces, treetops, and similar dangerous locales. Each bird weighs a few ounces when passive, but if threatened it puffs up its tiny feathered chest and gains 150 lbs. If a predator is noticed near a nest, the lodesparrows will land on the predator and lend the weight to the predator. This can pin it down, cause it to lose it's balance, or break the terrain beneath it. Some Lodesparrows are territorial and take offense to anything larger than themselves bumbling around near their nests. The eggs have distinctive lead shells.

Overlode: As an action, the lodesparrow grabs onto a target and lends 150 lbs to the target's carried inventory. This can have a variety of negative effects, especially if a target is climbing a rope, dead tree, or rickety ladder. 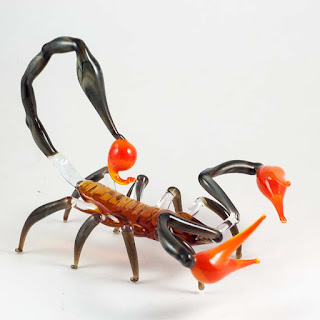 gorgeous
https://russian-crafts.com/glass-figurines/glass-insect/glass-scorpion-en.html
Riesling Scorpion
An opaque, amber glass scorpion delicately clinks out of a mouse-hole into the alley. Moments later, an anguished shriek echoes from the darkness within the building - the brewer's painstaking work has been decimated.
These tiny scorpions metabolize alcohol in a baffling way - by absorbing it from the area around them. Academic dissection reveals no clues: the fragile creatures appear to have no mouth-parts or esophagus. Even more curiously, they seem to have this capacity even while apparently dead - any corpses of an infestation must immediately be whisked away or risk tainting any alcohol nearby further with each passing moment.
Riesling scorpions are made of glass and thus have no conventional predators, but they flee from the sound of sheaves of paper rustling. Any desert trader would be well advised to hang a few old books from his wagon to catch the breeze and thwart these bibulous predators.
Tiny Animal
AC: 12 HP: 1 Speed 20', Burrow 10'
Stealth +6
Beak Attack +4 / 1 Piercing + DC 14 Con save vs drunkenness (see below)
Drunkenness: Use whatever rules you have for being drunk and treat as a sudden serious onset rather than just lightly sloshed, or just deal 1d4 temporary wisdom damage and gain 2 levels of exhaustion.
Bibulous Aura (30'): Any alcohol that stays within 30' of a Riesling Scorpion gradually denatures along the following track:
This aura continues whether the scorpion is alive or dead; unless it is melted, shattered, or otherwise totally destroyed.

Spoors:
Scribbled by Dragonsdoom No comments: